Friday night
Just when I felt like things had been going okay it hit me. I wrote that last post on Friday afternoon and by about 9 that evening the grief took over. The grief came on very suddenly and I know exactly why it did. I had received an email from my friend who is also a fellow fetal surgery baby loss momma like myself. We met through my blog shortly after she lost her daughter in the fetal surgery last August. We have been in touch ever since. She let me know in her email that the one year mark is coming up from the surgery and her daughters passing.
After she lost her daughter she was told to wait at least one year before trying again. I was told at least 6 months. I got pregnant at 8 months and my uterus ruptured. I know that there isn't a guarantee that my uterus wouldn't have ruptured had I waited a year or even longer to get pregnant, but I do know that the longer in between any c-section is best. I listened to the doctors and I still became another damn statistic.
The rest of the evening I played the damn "what-ifs" game. The same questions kept running through my mind over and over again. Why didn't the doctors tell me to wait 1 year or longer? I would've hated it but maybe this wouldn't have happened. Why didn't the doctors do a c-section at the 36 weeks? Instead they almost made me feel guilty about even doing one at 37 weeks saying that she might have lung issues. Alive is better than dead, and many babies are born at 36 weeks or earlier and are just fine. Why didn't the doctors tell me that even though my fetal surgery incision looked fine now that if a rupture was going to happen it could be any day? Why were they so damn certain that things were going to be just fine?
This went on the rest of the evening.
My friend also said that they might not even try at the one year mark, but instead wait until around December to give it more time. Even reading that made me upset. Not that I would want what happened to me to happen to her again, ours stories don't need to end the same, but there is this part of me that's afraid that there will be yet again another person who gets there baby before me. It made me wish that I had someone who had been through what I had before me. That way I could see how long they had waited to get pregnant after the surgery, what happened throughout there next pregnancy, the care they got, what there doctor recommended for a c-section date, whether or not they ruptured, and if they did rupture what there symptoms were.

Saturday
I woke up Saturday to the sun shining. I had mentioned in that last post about starting to enjoy the sunshine, but seeing the sun that morning pissed me off because I was still all bent out of shape from Friday night.
I decided to go check my email and the first email I see was from Derecks aunt. The email opened and it was a picture of Evelynn's gravestone. It was finished and was placed out at the cemetery next to Liam's. I started bawling. It looked beautiful and just like I wanted. Why out of all things though that I should be buying for my daughter right now did a gravestone have to be one of them? 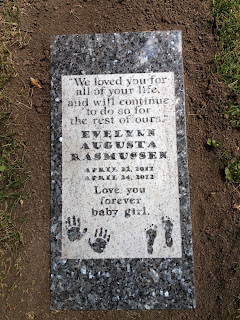 Dereck was going to be sleeping all day since he has been working nights while working in town. A friend of mine texted me and had wanted to bike to the airshow that was going on. Not really my thing but I really didn't want to be alone, so I decided to go. I didn't really think that one through though. Of course the airshow would be a huge family event. Already being pretty down that day and then having to see about half of Anchorage there with just about every person I saw having a baby in a carrier, stroller, or pregnant. So instead of watching the air show I stared at babies all afternoon with I'm sure what looked like the most pathetic sad, pouty face. I catch my myself staring at babies all too often. Anybody else ever catch themselves doing that? I wonder what those parents think of me when they notice I am staring at there baby.
By that evening I was all sorts of stressed out. A good friend had invited me out to her boyfriends cabin, which is about 70 miles away, and I decided maybe I should just go there. Once I got on the road I bawled my eyes out for about a good 45 miles of that drive. By the time I got there I didn't feel much like socializing at all. I was just tired from everything.

Sunday
Thankfully the next morning I woke up in a better state of mind. I got out stand up paddle boarding for the first time and loved it. Even my dogs hopped on with me.
When I left there I met up with this lady who I met through my uterine rupture group who has a story similar to me. One stillbirth and then a uterine rupture both resulting in loss. I think I mentioned meeting her a few posts back. Anyway that made for a nice way to end my afternoon. It is always good talking to someone who "gets it."

Monday
My coworker who was pregnant at the same time as me, whose due date was about a month after mine, came back to work. I was a little nervous about it at first as I was afraid that everyone would be asking her about her baby all day long and I would have to hear about it. It went surprisingly well though. She told me she actually asked others not to bring her baby up when I was around so I wouldn't get upset. So sweet of her to think of me and not wanting my feelings hurt. We got pretty close while pregnant and she was there to listen anytime I was having a paranoid moment and just to talk babby stuff with. I know she will still be here to listen to me as I grieve for my little girl, I just wish we could be talking about our new babies together. Actually, if Evelynn were here I wouldn't even be at work to talk to her because I'd be home with her instead.
We also started talking about pumping. It is nice to have someone to talk to about it. Also nice to have someone to share funny milk stories with because I have a few alright, which I am sure every nursing mom does. I have shared a few with friends but I am sure if find my random lactating moments quite as amusing.
A newer coworker, who had started shortly after I came back to work, had overheard us talking pumping on Monday. I always wondered who all at my work new about Evelynn or even that I am pumping. She apparently new neither. She had came up to me later that afternoon and asked about me having a baby at home as well. Always awkward having to tell someone and she obviously wasn't expecting the answer that I gave her.

Okay enough with that now that you got an update of my entire weekend. Hoping the rest of the week goes well. Next weekend hopping a flight to Katmai National Park with a friend bear viewing and hopefully doing a little hiking.
Posted by Becky at 4:59 PM