Evelynn's Story- Well Part Of It 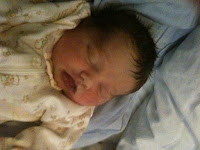 I don't even know where to begin with what happened to my sweet Evelynn. I am still in shock myself that we were so close to having her home with us and now she is gone. She was a perfectly healthy, beautiful, baby girl who should be here with us getting loads of hugs and kisses.

I have tried to write out her story the best that I can for right now.

On Sunday night April 22nd, 2012 at around 9:00pm I had a sharp, incredibly painful, feeling in my pelvis. I know I am not supposed to go into labor, which I have knowingly never been in, so I didn't know what to expect. We called Ob triage to ask them what we should do, but they were no help at all. I got another sharp pain, then another one right after that, and so we took off to the hospital. By this point I was in so much pain I could barely walk and was incredibly nauseous.

By the time we got to the hospital, in a wheelchair, and to Ob triage, I was in even more pain. Then as we were waiting to get help because there were others in front of us I yelled out that I think my water had broke. They hurried and helped me back to a room and realized I was actually bleeding. I was still in so much pain. I was told the Ob on call was on her way in and then went on to explain to them that I needed to have a c-section because of my fetal surgery. They were then trying to rip me out of my clothes and get me ready for surgery all the while trying to do an u/s to check on my baby girl.

I got rushed then to the O.R. to do an emergency c-section. They were trying to keep me still to get the IV in but the pain was so intense. The Dr. in the room with me then told me that they believed that my baby was already dead, but then they said that they think they found a faint heart beat so I was immediately knocked out and my baby girl was delivered.

Dereck was able to be with Evelynn right away in the NICU after she was born but I had to be in recovery for awhile. When I awoke I was happy to hear she was alive and stable, but then it got worse. The Dr. came in and talked to us and informed us that when they were doing my c-section they only had to cut through the first few layers and Evelynn was sitting right there, no longer in my uterus. My worst nightmare next to my baby dying had happened, my uterus had ruptured, causing her to come out of the uterus, the placenta then detached, leaving my baby girl to suffocate in my abdomen.

After a short period of time in the NICU all of her vitals had returned to normal. She was perfectly healthy. Her vitals were good, she had great color, perfect heart, and her kidneys were functioning. She was a perfectly healthy baby girl, but since the placenta had detached and she had been suffocating for so long her brain was left severely damaged.

The Dr.'s put her head in an ice cap to slow the swelling in the brain and to stop anymore brain damage from occurring. She was also having these seizure like attacks causing her to just shake.

I was able to see her in the NICU about an hour after the surgery still on my hospital bed. I was able to touch her but was unable to hold her due too the cold hat, ventilator, and other monitoring devices attached to her. I stayed next to her for the next hour or so before the doctors needed me to go back up to my room to rest from the surgery. 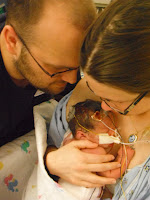 The next morning, Monday, when I woke up (actually I barely slept and wished I would've never left her side) the nurses wanted me to eat a little and then they would let me try to walk to the bathroom. Once I was able to do that they removed my Catheter freeing me from my bed. As soon as they got a wheelchair, Dereck and I were on are way down to the NICU to see baby girl! Dereck also had told me what he knew of what was happening with Evelynn and the cold hat. She was supposed to have had it on her for 72 hours and then they would remove it to do a full EEG. Things looked good for her.

When we got down to the NICU the nurses set up some chairs next to her for us to sit and be with her. We were still unable to hold her but we got to touch her and talk to her as much as we wanted. She looked so beautiful, I had so much hope for her that everything was going to be okay and she would soon come home with us.

After an hour or so the Dr. sat down with us and informed us that they weren't seeing any improvement with her brain activity and they wanted to stop the ice cap procedure and do the final EEG to verify that she had no brain activity. Dereck told them no and he would not approve of removing the ice cap until the 72 hours had passed. The Dr. told us they would talk it over with the neurosurgeon and that the decision would not be up to us. At this point knowing we had no control we called our Priest Father Scott to come be with us. When he arrived we asked him to perform a baptismal on Evelynn. My Ob Dr. showed up  also, along with a few friends. We then got her baptized right there in the NICU.

After the baptismal we stayed with Evelynn for awhile before the neurosurgeon came and told us that they were going to the Final EEG test without our wishes. My friends brought me back up to my room as Dereck stayed with Evelynn. Not long after getting to the room Dereck came up saying that he couldn't watch and needed to be with me. We had hope in this ice cap helping but the Dr.'s did not and mainly just wanted to do this test to hurry up the process because they felt there was no chance at a life for her.

The test was to take 45min to 1hr, but we were in our room for almost 2 hours without word of what was going on, so we just decided to go back down together to the NICU.  When we got there they had not put the ice hat back on verifying our worst nightmare. Soon after that one of the Dr.'s come over and said, "Just like I said she had zero activity the whole time." He then turned and walked away. The test confirmed that there was absolutely no brain activity and we were going to eventually have to pull her off of life support. 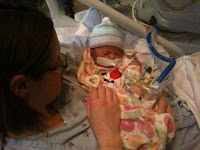 We asked about holding her and they finally allowed us to do so. It was the best feeling in the world to finally be able to hold my baby girl in my arms. We switched off and then Dereck got to hold her.

With the amount of visitors we kept getting and the NICU hearing that she wasn't going to make it they decided to give us our own private NICU room where she could still be hooked up and anyone we wanted to come visit us or her could do so with out being disrupted. We also were able to change her clothes, change her diaper, bathe her, and brush her hair. Such great memories with her that I will always treasure. So many of our friends came to visit us and see her. I loved knowing that so many people already loved Evelynn so much and were so devastated by what had happened to her.

Dereck's mom was able to get a flight in early Tuesday morning at around 12:30 am. We decided that sometime after she got in and got to meet her granddaughter that we would pull her off of her life support. Now I Lay Me Down To Sleep was also contacted so that someone could come in that night to take her pictures for us.

When the guy arrived from NILMDTS he first took pictures of us holding Evelynn while she was still alive and hooked up to her machines. Then when we decided it was time to take her life support off everyone left the room for me and Dereck to just hold, kiss, hug, and tell Evelynn how much we loved her until her heart finally stopped. She was alive on her own for about 20 minutes. Then we finished the rest of her pictures with the photographers. Once the photographer left I swaddled my baby up and slept with her beside me the rest of the night.

The next morning they moved us out of that private NICU room back up to our regular room. Dereck and I spent that whole day just cuddling Evelynn. We had lots more visitors from friends and other family that had showed up also. When night time came again we knew that Evelynn was ready to go. I didn't want to part with her but I could tell she was no longer with her body anymore and she also no longer looked like she had even hours earlier. We talked to my Ob and also talked to the hospital that we wanted it to be that when we checked out that next day, Wednesday afternoon, that we wanted Evelynn to get picked up then also. I did not want to have to be in that hospital any longer than I needed to if my baby was no longer there. So that last night I again cuddled close to her and got to spend my last night with her.

The next day came and friends and family were there for support. We spent our last few hours with our baby girl and then said goodbye.
Posted by Becky at 4:21 PM