I apologize again for not getting a post, or just a short note, letting you all know things were okay out sooner. I had wanted to wait until all the papers were signed before I made any big announcements, just in case. Then, once papers were signed I just kept saying that I'd post something tomorrow, which I obviously ended up never doing til now. Here is a short, well kind of long, look at our adoption journey after baby was born.

Baby Ruby Evelynn was born on August 3, 2015 at 1:42pm. She was 6lbs 11oz., 18.5 inches long, and had a full head of blonde hair. Our birthmom did great and I am so grateful she let me be in the delivery room. When the dr had broke her water that morning there had been meconium in it which can cause the baby distress and lead to infection and even pneumonia. Because of this there was a pediatrician and nicu staff in the delivery room to assess baby at birth. Once born they were able to suction a lot of the meconium out of her lungs right away but said she was having some breathing issues and would need to go right to the nicu. I was so panicked but I was also so glad that she was induced that day because I can't imagine how much worse it could've been had they waited til she went into labor on her own.

I headed down to the nicu shortly after Ruby was brought there to see how she was doing. The pediatrician told us that by the time they got to the nicu she was doing remarkably better, so they decided not do the xray afterall and said that she didn't even need the cpap. They still wanted to monitor her for a couple hours though and wanted to give her all her shots before they would let any of us hold her or release her from the nicu.

In the state that we adopted her from it only had a 12 hr relinquishment period, but since Ruby wasn't born until the afternoon our adoption lady wasn't going to come in the middle of the night to get signatures. So, when Tuesday morning came we were so eager for the adoption lady to come. We waited and waited and waited some more. Ruby had been in with her birthmom most of the day, except the feedings and that we had her in our room overnight, so Dereck and I had to just sit in our hospital room alone with our thoughts, and we were going crazy with fear. I thought pregnancy was scary waiting for a baby to be born alive and healthy, but let me tell you, waiting for the birthmom to sign the papers is a real mind f#÷&. Her husband, who wasn't the bio dad, and her mom were all trying to convince her to change her mind. We were certain we were never going to get to see her again. Finally, at about 3:30pm our adoption lady came in and said the papers were signed. Our birthmom even put Ruby Evelynn on the birth certificate. So, when everything's official all we would have to do is get her last name changed to ours.

We left the hospital shortly after the papers were signed and moved close to where the agency was, about an hour and a half away. We just needed a release from the agency stating that we were Ruby's power of attorney and a letter from the agency stating that the hospital can release her into our custody. We went to the adoption agency the next day, on Wednesday, and signed our section of the adoption papers. Ruby's bio dad went into the agency office on Thursday and signed his section of the paperwork. From there on out we just hung out at our hotel waiting to hear when our court date was and also when Juneau had received and signed off on ICPC. A week later, on the 12th, we finally had court. There we met with the lawyer and a judge. We were able to do this now so that we don't have to come back for the official court date for finalization on September 30th. At that time the lawyer will stand in for us and Ruby will officially be ours.

Also, on the 12th we drove back to the town Ruby was born in and met up with our birthmom and her family so they could spend a bit of time with her before we left town. It was so evident how much her and her family loved Ruby. I am so grateful that she chose us and says she made the right decision, but we feel for her. We know far too well what it is like to leave the hospital empty handed. We assured her that we will not disclude Ruby from her life. We have each others phone numbers to keep in contact and can send pics via text message. Also, part of the legal agreement is that we send her and the bio dad at least 10 pics every 6 months the first 2 years and then once a year after that. We will send her all the pics she wants, directly to her even, if that's what she'd like. I think and hope we will always have a good relationship and that Ruby will always know who her birthmom is and knows that she loves her.

We finally got the call on the afternoon of the 14th that the ICPC paperwork was approved by Juneau, which meant we could finally go home. We got plane tickets for the next night, the 15th. Exactly 3 weeks to the day we left, we were finally home.

As far as the breastfeeding goes, well, it's not going as great as it did with Max. I ran out of domperidone a few days after she was born. Since things went so well when I breastfeed Max, I just assumed I wouldn't need to be on it after she was born and started nursing. Well, I'd also say that the stress I felt during the hospital stay didn't help. By day 3 it seemed I already couldn't keep up and we had to supplement with formula. Now that we're back home it'll be easier to work at getting it back and I'll get back on the domperidone for another month or two. The good news is that she doesn't seem to have any nipple confusion and latches on great, so hopefully it won't take too much work.

She is such an amazing little baby and we love her so much. And today she is 2 weeks old. Our family will always be incomplete without our sweet babies Liam and Evelynn, but I will say that it seems a lot more balanced and incompletely complete now that we have our boy and our girl.

Thank you everyone for all your support on this long journey of ours to grow our family. Here's Ruby, isn't she fabulous?! 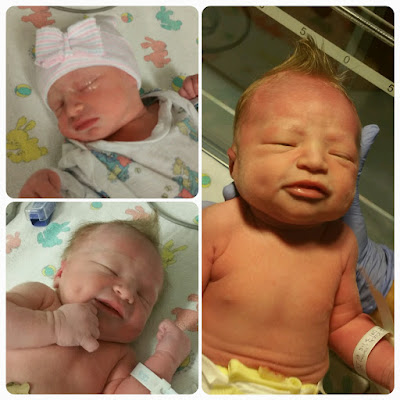 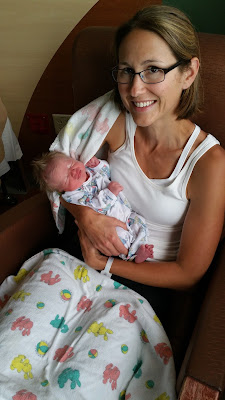 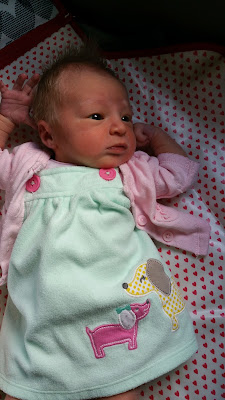 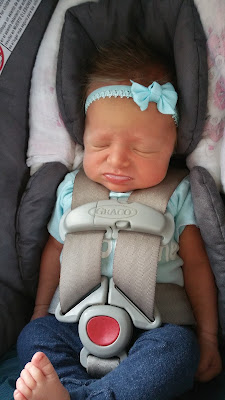 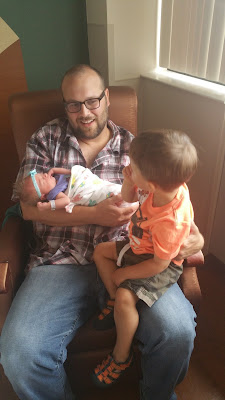 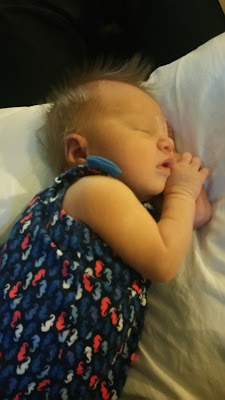 I also just want to say now before anyone decides they want to comment anything along the lines of "us saving her," or anything else of that nature that I hear far to often from other adoptive families. I even already had a fellow blm from one of my loss groups say that it's just so sad that her mom didn't want her. Maybe in the case of some adoptions that can be said, but in the case of ours, it is far from true. She loved her so much that she wanted to ensure she had the life she knew at this present time she couldn't give her. If anything its a very brave and noble thing to do.
Posted by Becky at 9:29 PM