Not sure if I had mentioned this or not but my Ob/Gyn Dr., who I have been seeing since before Liam even, is out for shoulder surgery for the next couple of months. I love this Dr. and was nervous to have to pick a new one to take over my and baby girls basic prenatal care. I am just hoping she will be healed and back in time for my c-section, but it will be cutting it close.

So on the 15th I met with my new Ob Dr. He is a partner of hers in the same practice, that a friend of mine also see's, so that is why I choose him. I just have to say that he is awesome and so is his nurse!

He talked to me right away about how sorry he was for my loss of Liam and then moved onto his thoughts on the fetal surgery and my incision. It amazes me how every Dr. has there own views about how we should go at my c-section. He feels that he would be comfortable doing my c-section anywhere between 36 and 38 weeks, so about 37 like has been discussed with the Perinatologist. He also told me about his views on how to classify me since I have had fetal surgery but I don't exactly have the same outcome as most other patients who had it.

So am I more like a fetal surgery patient or a c-section patient then??? and I know I am going to talk about this again!
For one I only have one incision instead of two like the other fetal surgery moms would have and two my surgery was done and baby was delivered the same day just before 26 weeks, so my uterus never got stretched out as far as even most c-section patients would be with closer to full term ones. The real difference with me is just from the fact that my incision is not in a normal location, the very thick top back portion of the uterus.

He mainly just feels that the statistics that the Perinatologist from both UCSF and the one I am seeing here gave me about rupture rates and what not from having a future pregnancy/c-section after fetal surgery don't really apply to me. I have such a hard time with this and I am sure people are sick of hearing me whine about my concerns on having a uterine rupture or other crap go wrong since I had the fetal surgery. Things are going great with this pregnancy, stop worrying about it already, right? Honestly after I left this appt. I was pretty down for awhile. The thing about all this is that everything he mentioned I already know. I also know people that have gone on and had mutliple pregnancies after fetal surgery and so on and everything has worked out just dandy for them, so why wouldn't they for me. Dereck and I have talked about all this for a long time. I feel like what it all comes down to is that if Liam would have lived this wouldn't be that big of concern, but since he died and this baby just has to live, she just has to, its easier to use the fetal surgery as a crutch for my craziness than for me to just admit that I am just plain out scared of hearing those awful words ever again.

After that long talk he took a measurement of my belly and informed that I am measuring small but he isn't concerned since the u/s shows that she looks good. I think I look small also though. Everyone else I know looks huge already, but I think its because she just sits in my pelvis the whole time, and pretty sure she uses my bladder as a pillow. When I look in the mirror I feel more like I have this butt in the front then a pregnant belly. Oh well, as long as she's healthy she can hang out wherever she wants I guess. He also looked at my present incision scar and mentioned the length of it, it goes all the way from one side of my pelvis to the other. He said that the next one will be half the length which will make my recovery so much easier, woohoo on that! He then brought up to me that now that I am almost to my third trimester I need to start my kick counts, pick a pediatrician, and also preregister at the hospital. When did we get to this point? and to think I was close to all of this with Liam. We also did my glucose test so I am waiting to hear back on that.

All in all it was a good appt. It also really helps that he talks in a very caring, sincere, yet laid back manner. I can already tell that I am gonna like him alot, even enough that I can say already I think I would be okay if he did my c-section. 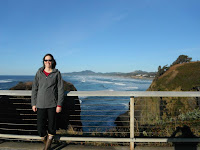 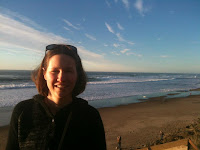 I went to Portland and the Oregon coast to visit a friend the other weekend. It was supposed to be my getaway weekend before I had to really get serious about baby preparations. The trip was a lot of fun, great weather, and I ate a lot. Right now I am ready for another vacation. I returned home to a leaking roof, which leaked through all of the house levels with the most damage that we can see as of right now being in the nursery. My beautiful nursery right now is half ripped apart. I know there could be bigger, scarier things to whine about right now, but WHY the nursery, if something was going to get ruined there are plenty of other rooms in the house that could use a remodel. The worst part is that it won't be able to get put back together until this spring when our roof can be fixed.
﻿﻿﻿
﻿
﻿﻿﻿On a brighter side, if there is one to having a roof leak, is that all of baby girls clothes and other items have now been washed and placed in bins since I have to clear everything out of the nursery so it can be further ripped up and worked on. Good thing she will be living in our room for awhile since it looks like the nursery will be out of order for awhile.
I have also spent this past week working like crazy on Liam's scrapbook, so between the house leak, new dr. visit, and this I have been a little over emotional, but yet I still feel like things are going to be okay.
Posted by Becky at 2:26 PM