Today I had another appt with the Perinatologist, the same one that did my anatomy scan. Baby girl is measuring in the 32nd percentile with her head measuring a little on the small side. The Dr. said she isn't too concerned about this so I am trying not to be either. It kind of bugs me though because Liam's head measured big and it turned out to be because of the hydrocephalus from the spina bifida and now hers is exactly opposite being on the small side, hmmm.

On top of wanting to make sure things were still measuring on track we checked the incision, which still looks good. She then wanted to look at where the placenta was sitting according to the incision, which she said sometimes it can happen that the placenta will attach itself to an old c-section scar which can cause problems. She said that everything looks good though and she will see me back in a month to check it out again. Love hearing good news!

She also said that she had done a bunch of research since I last seen her on other fetal surgery moms who had transverse fundal incisions like mine and what the statistics showed for uterine ruptures. It looks like my type of incision in that location shows about a 14% rupture rate. She also called UCSF and talked to my Perinatologist there to see what he would recommend. If you have followed other posts this has been something I have been a little concerned about and my Dr.'s have talked about anywhere from 37-39 weeks for a c-section, with 39 scaring that crap out of me. It looks like as of right now, even though its still many weeks away, I will be getting the steroid injections at 36 weeks with or without an amnio. The c-section will be at 37 with the NICU team prepared, which makes me feel more reassured. I personally don't want the amnio since they said we will do the c-section whether the lungs are matured or not and don't want to risk going into labor a week early when she will be delivered a week later anyway. So technically as of Friday I only have 12 weeks to go.

We tried to get good pics of her face but she liked to keep it buried in the placenta. In the pic to the top right you can see one of her legs up by her face. She kept it there almost the entire time and looked like she was kissing her knee. So here she is at 24 weeks + 5 days. Can't wait to meet you baby girl! 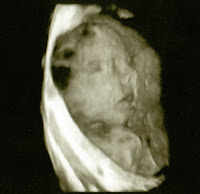 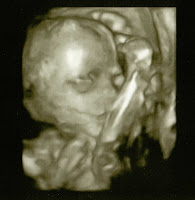 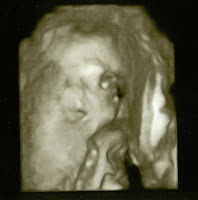 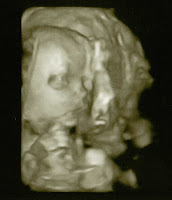 Counseling
I had an appt with my counselor yesterday. If I cry much these days it tends to be at these appts because we talk strictly about my emotions, and now that I am pregnant again we talk a lot in regards about what happened to Liam and how it affects this pregnancy.

She has known me since about 2 months after Liam passed and so she has seen me at my some of my worst moments in grief and has also heard all about my paranoia and fears about this pregnancy. She, like many others, friends, coworkers, and Ob dr., and has seen how much I have changed since the beginning. But yesterday she talked to me about really needing to find away to make peace with what happened to Liam because she really thinks its going to affect my little girl, if it hasn't already. She also feels that I am a perfect candidate for postpartum depression and suggested either starting on some antidepressants now or try doing some EDMR.

I don't know what to think about this. I don't want to be on drugs and I think if we do EDMR I will end up depressed. I think I am doing really well for someone being a year out. I read through many blogs and feel like where I am in my grief is pretty comparable to what other blm's are feeling for this stage in their grief, pregnant again or not. Am I wrong on this? I actually think I will be overjoyed when I finally can hold my living baby girl in my arms.

She mentioned that she is afraid that unless I can make peace with this that my little girl will grow up feeling like she is living in the ghost of her brother. She also would like it if Dereck would start coming to my counseling sessions till the baby is born to get his perspective and learn more about how he is processing everything that has happened.

It's a lot to take in and I just feel so overwhelmed by everything she said yesterday. I could hardly sleep last night and even got up this morning still feeling down and had to have a good cry before work. I really feel I'm doing better and have made so much progress.
Posted by Becky at 9:25 PM