January 7, 2013
Today Jessica and I both had an u/s. Everything went well for both of us and was informed to start my follistim the next morning.

January 8, 2013
I started my follistim today. I had to inject 150 units in the morning and then another 150 units 12 hours later for the next couple of days until my next u/s. 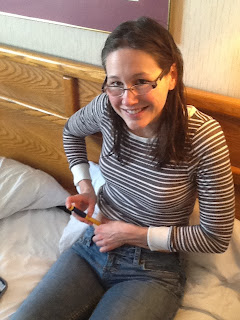 January 10, 2013
Today I got another u/s and also got my estradiol checked.

January 11, 2013
Got the results of my estradiol back and everything with that and the u/s looked good. I now needed to start taking the ganirelix in the morning with my follistim injection and then inject 150 units of the menopur in the evening. I hate the menopur. I had no issues injecting the others but this one hurt, drew a good amount of blood, and burned. I also managed to screw this drug up, and not just one night but two. This drug is a mixing drug and somehow I overlooked the fact that I needed to mix two vials of the powder and so I underdosed myself both of those first nights of taking it.

January 12, 2013
Early this morning Dereck and I hopped on a flight headed to MN. We were supposed to have an u/s at our RE's office the next morning, but it got switched to Monday instead.

January 14, 2013
The next u/s to check my follicles and blood draw to check my estrogen levels again was at 8:45am at our RE's office. At this appt. we learned that I had 3 large follicles that were already matured and then a few other little ones. Our RE reviewed those findings and one of the nurses called to tell us the news. Apparently since we had 3 follicles ready to go we had to make a decision. We were told that we need to either do the egg retrieval with 3 follicles on Wednesday or cancel the whole cycle and hope that next time we get more follicles. I started crying instantly hearing this news. I know that the quality of the eggs, and the embryos, is more important than the quantity, but 3, how can I only have 3 follicles? I have read so many blogs about this and so many seem to have 10-20 follicles. Ugh! My RE said he was surprised I reacted so quickly to the meds, but did say though that he feels we have a good chance since our reason for doing IVF is different than most. We also know that I could get pregnant and also could carry a healthy pregnancy. I hope he is right and everything goes well, otherwise we have to start over in another couple months.
So since we decided to still go ahead with everything, I needed to do my HCG injection this night at 10:30pm so that 36 hours later we could do the egg retrieval. I also no longer needed to do any of my other injections. That was kind of a waste of a lot of expensive meds I don't need anymore. Oh well.

January 15, 2013
Today Jessica had to get an u/s to check her lining. She wasn't supposed to get another one until Thursday, but since are we doing the egg retrieval 4-6 days sooner than planned, they needed to make sure she is ready for a transfer. She told me the u/s went well but would need to start taking 12 estrace tablets a day, versus the 2 she was presently taking, to make sure she is ready for an earlier transfer.
Today I also started taking my doxycycline to help prevent infection from my retrieval.

So it looks like tomorrow is now retrieval day versus the coming weekend. I should be sleeping but instead I am up late typing this. I think it going to be hard to sleep tonight anyway as tomorrow is such a huge day for us. Once morning comes I can have 16 ounces of water 3 hours prior to the retrieval and that's it. We have to be at the clinic by 9:30am and the retrieval will be at 10:30am.