January 16, 2013 We got to the clinic at 9am on Wednesday morning. At about 9:20am we were brought back to a room where I got a couple valium to help relax me and also had to put a gown and robe on. I had my vitals taken and then got an IV placed. Our RE then came in just before 10:30am and explained what was going to happen during the retrieval. Dereck had to stay in the room we were in and I got brought down to the procedure room. I was able to watch the whole process on monitors next to me and so did Dereck in the room he was in. The procedure was over within minutes and then I got wheeled back in by Dereck. The retrieval ended up going way better than expected. The other day we had only 3 mature follicles, but another must have grew enough thay we ended up getting 4 eggs. It is still less than what we hoped, but 4 is better than 3. After the retrieval we were told that ICSI will most likely be done to help with fertilizing the eggs. Fertilization isn't necessarily an issue with for us but our RE wanted to be on the safe side since we only had the 4. We were then told that if 4 embryos are created and look good we may try for a 5 day transfer, but if they aren't doing well the transfer may be on day 2 instead. Another nerve racking day of waiting until we hear how the embryos look. Jessica started her progesterone injections today also. Need to make sure her lining is good and she is ready for the transfer. January 17, 2013 At about noon we received a call from the clinic. The nurse said she couldn't tell us anything about our embryos other than fertilization took place. She then said that our RE thinks it is important that we do a 2 day transfer versus a 5 day. He feels that our embryos would be better off in their natural environment verus being in their incubators. I hate that the nurse couldn't tell us at least how many embryos we have. Did all 4 make it then? She then told us the time we needed to be back at the clinic the next day. We will first be speaking with the embryologist and then the transfer will take place right after. The clinic then called Jessica to inform her that she needed to be at the clinic tomorrow as well.
I can't believe we are doing the transfer already tomorrow. We weren't even planning on doing the egg retrieval until this weekend. I see another night of little sleep as I am so incredibly anxious. January 18, 2013 Dereck and I and Jessica and her husband arrived at the clinic at 9:45am today. Jessica got brought back to the transfer room right away to get ready. Dereck and I then got brought back to a separate room where the embryologist came in and spoke to us. We got our report card and she explained it to us. We started out with 4 eggs on Wednesday. Only 2 of those were mature so they did ICSI on both of those. For anyone who doesn't know what ICSI is, it is where they take one sperm and they put it into the egg to help with fertilization. Normally a bunch of sperm would just get thrown in the dish with an egg and let fertilization happen naturally. 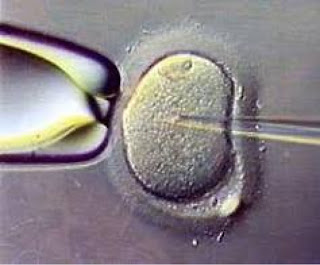 So ICSI was done on 2 of our eggs, but only one fertilized. My jaw dropped and I almost started crying. How is it that we do IVF, when we have gotten pregnant without it twice, but yet we do it and only end up with one. I guess I thought for sure that we would have a lot of eggs and then a lot of embryos. I am overjoyed that we do have one though. One is better than none. At least 2 would've been nice so then we could transfer 2, and not just so we could have a better chance at twins, but also to up our chances of having at least one of them stick. We also do not have any embryos for the freezer so if this one doesn't take we have to start the IVF process over in a few months. Let's just hope this works the first time. Anyway back to our one embryo. The embryologist said that even though we only have the one embryo we have about as perfect of a 2 day embryo as you can get. It got graded at 4A-, which apparently is really good. The embryologist asked if we had anymore questions and then brought us into the transfer room with Jessica and her husband.
Inside the transfer Dereck and sat in a couple of chairs to the side of the transfer table along with Jessica's husband. Our RE then came in and had Jessica lay on the table. He explained to her and the rest of us exactly what he was going to be doing. First he did an u/s to check her uterus and make sure there weren't any chances since the last one she had. Then he did a mock transfer just to make sure that the embryo would make it in okay. That went well so now it was time for the actual transfer. It was kind of weird but the nurse in the room actually turned the lights down low and turned on some quiet music. Almost like they were setting the mood. Like this whole process wasn't awkward enough. 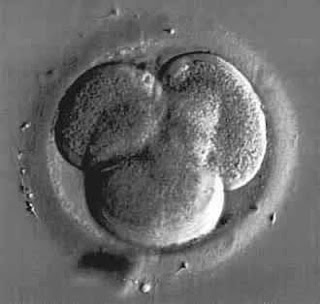 After the embryo was placed the doctor shook all of our hands, said he was glad that he good be a part of our journey, and also said what a wonderful person Jessica is to do this for us. We were in that room awhile longer since Jessica was told she needed to lay for about 5-10 minutes before they would let her leave.
After Jessica was released we all went for lunch. I ended up buying a book for Jessica, that I had learned of through another intended parent called the Kangaroo Pouch, and gave it to her at the restaurant. It is a book about surrogacy so that she could help to explain to her kids what was going on. Jessica will have her Beta in 2 weeks. She was told that maybe the earliest we could do a pregnancy test wold be in about a week and a half. We decided that since we will be up in the area where she lives visiting Dereck's family that maybe we could swing by there place for dinner and then do a home pregnancy test then. After lunch we said our goodbyes for now.

I can't believe our journey of trying to bring home a rainbow baby has started once again. I so hope everything works out for us this time. For now I am optimistic. Now how to get through the next week and half and then hopefully the next 9 months?