My full Ob check appt was originally scheduled for Thursday but I had to get it rescheduled to Monday. I was told that I wouldn't be able to get an u/s that day though because the room was booked already, but I refused to wait another week and a half to get in and see my dr., so Monday it was. It must have been my lucky day though because the room ended up being open. I had blood work, a pap, some other stuff done, and then Dereck and I got to see our little babe. He/she was hopping around, upside down like crazy, with its arms and legs moving all over making it hard for my dr. to get accurate measurements. What an incredible feeling it was to see so much movement going on from a baby that is only 3cm long. That still amazes me. My little babe has been measuring about a day behind but after Monday my dr. says it looks like he/she is measuring about 5 days ahead now. Woohoo! 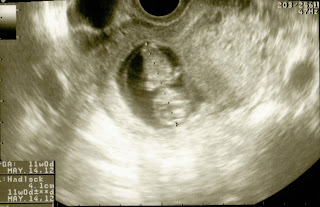 I will be going in on November 8th to get the first screening, the nuchal scan, done. I am not too nervous at the moment about it but I know as time draws closer to it, especially right after it until I get the results, I will most likely be a nervous wreck. I got this done with Liam even though it was not recommended. Most people I knew never had it done and thought it was weird of me to have got it done. I was glad I got it though because it is was first told me that Liam had a 1 in 30 chance of having a neural tube defect. Even after hearing that though people told me not to panic because of false positives, etc, but 1 in 30 seemed like a pretty high chance to me. And I was right. Just crossing my fingers everything will come back perfect this time around.

It has been so nice to not feel all stressed out and panicky, so I hope this optimism and excitement I have had this past couple of weeks will continue.﻿ My next ob/ u/s appt with my dr will be on 17th. I will then be at about 14 weeks and starting my second trimester. I know its still early but time really does seem likes its moving along pretty quickly.
Posted by Becky at 8:52 AM