Not sure when the belly got this big but pretty sure it has tripled in size since last week.

It had definitely been a few good weeks with out any real freak outs, but then baby girl scared the crap out of me this past weekend. I didn't feel any kicking most of the one day with her being the most active at night. That night we went to a work dinner and pretty sure I left in a complete food coma, so either she was in one too or something, but she wasn't moving. I started getting nervous but figured by the next morning I'd feel some little kicks at breakfast. Breakfast came and still nothing. The next day at work I constantly was poking at my belly just hoping she was going to move, but still nothing. By the time I got home from work it was doppler time. Then more freaking out because the normal spot I get an instant heartbeat was not working. I of course found it but not before my thoughts were turning into "oh my god what if we have to go to the dr's office because we can't find it" mode.
Her lack of kicking then made me think about Liam's last day with me.  The night of and right before surgery that morning he kicked like he had never kicked before, and then he was gone a few hours later. So then I had to inform Dereck that if baby girl ever kicked like that I was hightailing it to the hospital asap.
So if she doesn't kick much I will be freaking out and if she kicks too much, like Liam did before he died, I will most likely freak out. Can't win, but at least things are still going good for now so I can't complain.

My birthday was on Wednesday. A few friends, Dereck, and I went to dinner and celebrated my 30th birthday. I am actually 31 this year but since I was so grief stricken last year for my 30th I had already declared a do over for this year, and must say I was in way better spirits for celebrating this year.

Registry is pretty well complete and my good friend is in the process of setting up a baby shower for sometime in March. Crazy to think that in just a month I will be in my 3rd trimester already.

Signed up for a breast feeding class in March. Not sure if that's too early but they aren't offered very often and wanted to make sure Dereck would be around to go with me.

Next appt with the Perinatologost for an u/s of the uterus and to see baby girl again is scheduled for next Wednesday.


I also got my "Liam" Molly Bear on Tuesday. 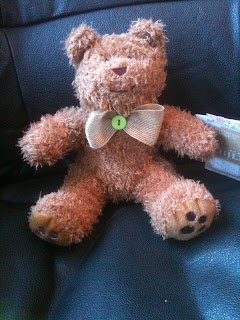