Super Long Post Part 2: Everything Else That's Been Going On

Distraction Projects
I haven't done much for distraction projects lately. Hell I can barely bring myself to even clean my house these days. Seriously, what happened to all that energy I had the last couple of months? I have been playing around a lot on Pinterest though. So many projects that I would love to make in memory of my babies and even more I want to make for my future babies and the house. I have a few projects that I want to start on but I think it would be good to get the house cleaned and organized before I add more clutter to the disaster I feel my house is presently in. I had decided to go to Jo-Ann Fabrics last week though, just to get a few things for one of the projects I really want to do. As I was walking around the store I started thinking about the last time I had went there, which was about a month before Evelynn was born. I had a whole basket full of scrapbooking stuff so that I could start working on her scrapbook. The lady behind the counter had asked me if I was making a scrapbook for a friend or relatives new baby. I had told her no and that I was making one for my baby who was going to be here in around a month. I remember the lady saying how she didn't even think I looked pregnant, but congrats! That thought played in my head over and over again. The tears started forming so I had to go check out quickly and before I hit the car I was bawling.

Baby Anxiety
Last Monday I went into work and heard that the Dr. I work for daughter was in town. She had her baby about a month before Evelynn was born. It was our Dr.'s birthday and we were going to have a potluck for him. I heard that his daughter and baby might be coming in. I like his daughter but there was no way I could be there if she came in. Last Wednesday morning was the day of the potluck and birthday and there I was at home bawling my eyes out and having an anxiety attack before work fearing that I was going to be stuck at work and have to see and hear about the baby. She never came in thankfully, but holy anxiety attack thinking about it.
That same day a friend of mine, whose baby was born a month and half or so after Evelynn was born, set up a birthday get together for another friend. She said her baby would have to be there though. I have wanted to meet up with this friend first before I was ever around a room full of people ooooing and awwwwwing over a baby in front of me. I considered trying to force myself to go since I am trying really hard to move forward and put myself out there even if it hurts. Then I read a comment for the event on how excited someone was to see the baby and I knew right then that there was no way I could go when my daughter should be here too. Tonight is the birthday party. I hate saying I hate being left out because surely I could go, but in all reality I couldn't handle it. So instead I am sitting here inside typing away and cursing at the world and the stupid sunshine.
I really hate how another year is going by where I still can't handle going to certain gatherings with friends or even coworkers for fear of a baby. It's such BS and makes me feel so left out.

Counseling and Wildflowers
My counselor has been working with me on doing some EMDR work to help me with the trauma side of things. This past week she had me envision a place that I really like, I guess to be like a safe place. I pictured this hike that I love called Lost Lake. There is an area there that I love that is filled with beautiful wild flowers. We didn't get very far with what she was trying to have me do though as I broke out bawling. Thinking about that place made me think of my babies. That poem that I read at Evelynn's funeral about Heaven that I fell in love with after Liam passed away talks about "your child running through wildflowers" and I like to imagine that area to be like in heaven with my babies running through it laughing and smiling. My counselor decided after that, that maybe I wasn't ready to do that kind of work yet.
On Saturday I went to Lost Lake hiking. The whole hike is beautiful but this one wildflower area I am in love with. I am not the best photographer, but come on, that is beautiful. 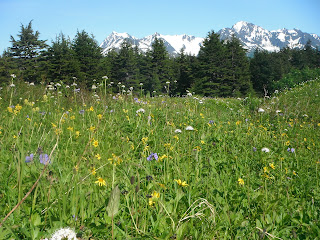 Give Forward Fundraiser
The Fundraiser through GiveForward that my friend had started a few months back ended last week. Thank you so much to everyone that donated to it or spread the word by putting the link on your blog. I am so happy that we were able to raise $6,500, bringing home $6,184.50 after the website took there cut. That's half the cost for the prepayment of the egg retrieval. Now if only I can get my butt in gear to work more on my silent auction chili feed fundraiser.

Work
It has now been two works since my coworker who was out on pregnancy leave has been back. It really has been great to have her back, although I still wish I wasn't there. I love how she is not afraid to talk to me about my loss and also that she can mention her son around me as well. Although she has mentioned that she is worried she will say the wrong thing and make me feel bad. I am glad that she is mindful of it but love that she doesn't ignore me. I could talk all day about why I am angry at the world and miss my daughter and so on but I also understand that she does have a son now and she has the right to talk about him on occasion as well. I wish more people would realize that even though I am angry and sad that I am also lonely and when you ignore me it makes me feel like you don't care. Maybe some people don't care, maybe some people don't know what to say, and its true that there are some things that can be said that truly will make me more upset, but to not talk to me at all makes me feel like I am contagious or something. I hate having to be there when I know I should be with my babies but at least my work days have been a little more bearable with her around.

Today was the day that I had set up with my boss to go back to work after Evelynn was born, Mind you that I wasn't planning on going back but wanted this set up just in case. Fuck that I was right to have to set this up versus just quitting my job. I guess this date doesn't mean much since I have been back at work for a couple months already, just saw that I had it programmed in my phone, and it sucks.

What else...... Oh yesterday was one of those days. You the ones where you wake up and you can just tell it isn't going to be good. The crying came and went all day long. I also had a talk with Dereck about thinking that we need to find a very reputable medium and then get an appt. with them. Anyone know a good, reputable one? I searched Google for quite awhile in search of one. I wouldn't say I fully believe in psychics or people that say they can communicate with the dead but there's a part of me that thinks maybe, somehow or another, one could help me. I don't even really no what I would ask or what I would truly hope to get from meeting with one. Maybe just hearing one tell me that Liam and Evelynn are okay and that they love me is all I would need. Maybe I could get some kind of answers for the zillions of seemingly unanswerable questions that I have. Maybe I would need more.

So much more I could write about but I guess enough for now. I am surprised I got this much out since I really can't think straight most days anymore, So much going on in my head. I keep wondering how the days keep going by at the speed they are as I feel most days I am getting nothing accomplished and yet the day is over. I guess it doesn't matter physically how busy you are because when your mind is all over the place time somehow can go by just as fast, maybe even faster.
Posted by Becky at 7:50 PM