On Wednesday morning we flew back to Minnesota to see family and prepare for Evelynn's burial this coming Wednesday. I actually slept the majority of both flights, which is rare for me. The second leg of the trip I even had a dream of Evelynn. I really wish I could remember the details but as soon as I woke up all I could hear were the sounds of a cooing baby a few seats over and all my memory of the dream was gone. Lots of babies were on our flight also, I wasn't too bothered by them though. All I could think about was how the next time I was supposed to be on a plane was when Dereck and I were bringing Evelynn home to meet friends and family. We already had it planned. It was going to be around the fourth of July and we were going to get her baptized the following Sunday by the same Father that did Liam's funeral and burial. I also had planned on spending many hours at Liam's grave. I wanted to lay there all afternoon for multiple days, and just be with both of my babies. Sadly this will still happen except for Evelynn won't be in my arms, she will be buried beside Liam.

The last two times that we have gone back to MN/ND now were for Liam's funeral and then his burial a few months later. This is now our third time home in less than a year and half, this time to bury our daughter. We decided to have Evelynn's burial on May 16th. That is also the same day exactly one year ago that we buried Liam on. I can't believe I am actually burying my babies exactly one year to the day apart form one another.

So much of this trip seems the same so far. I guess why would it be different, our reason for coming back is the same. We flew into Minneapolis, went to my parents for a couple of days, and then headed up toward North Dakota where Derecks family is and to prepare for the burial. Today we planted some flowers at the cemetery and discussed where Evelynn will be buried in accordance to where her brother is. I also got to see Liam's finished marker finally, more on that in another post though. Tomorrow we will be going to a florist to pick out flowers for Evelynn's burial. Yup, that's right, I am picking out flowers for my daughters burial on Mother's Day. That's as depressing as when I think about how we had Evelynn's funeral on the day of what should have been her scheduled c-section.

I had met another blm this past summer just before I got pregnant with Evelynn. She had contacted me after one of Derecks family members had told her family about me and my loss. A couple weeks after I got pregnant with Evelynn she found out she was also pregnant. We have since spoken on and off throughout our pregnancies. We had hoped that after our rainbow babies were born we would have the chance to finally meet. That stop was supposed to be added to one of our many stops that we would have made when we had come home in July with Evelynn. On our way up to ND we drove past the city in which she lives and thought about her. I am happy that her pregnancy is still going well, her rainbow should be here any day now. I wish her and her family the best. I still want to meet her one day though, I'm just not sure how I will handle it right now. It might still happen, but I know if it doesn't she will understand why I couldn't stop in.


Another Mother's Day. Another one where my arms are still empty. I don't even have much to say about it. It sucks. It isn't fair. My Evelynn should be here, my Liam should be here :(. A couple of my good friends did send me Mother's Day flowers though. I love them, and love even more that they recognize that I am still a mother even though my babies are in heaven. 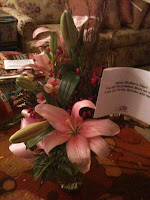 The card reads: Happy Mother's Day!!
You are the greatest Mom we know. 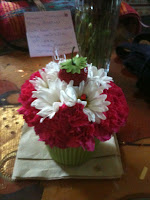 This card reads: We love you and we are thinking of you.
Around Mothers Day last year I wrote a post about the wonderful bench, flowers, and gift card Dereck and I received from our Alaskan friends for Mothers Day. I don't think I could ever thank each and everyone of them enough for the love that we felt. All of the contributors; Kristin, Kate, Laura, Elana, Jill, Kristen, Mike, Keegan and Jesse, Brooke, Steve, Justin, Paula, Eric, Jessica and Rhett, Sara, Kris, Adam, Greg, Jillian, Thomas, Jennifer, Christine, Kevin, and especially Liz. Thank you again for that and also thank you all again for all of your love and support this year after the loss of our sweet Evelynn. I only wish that this Mother's Day I could have had every one of you over to celebrate Mother's Day with Evelynn and I and remember my sweet little boy.
I remember talking to my counselor about the bench, flowers, and gift card after I received them last year. She expressed to me how lucky I am to have such wonderful people in my life. She also mentioned the idea that maybe all of this was somehow Liam's gift to me in that I now know just how great of people I have in my life. I am still not quite sure how to take that idea but I will say that I feel Liam's passing and now Evelynn's has definitely opened my eyes to how truly wonderful some people are and how lucky I am to have them in my life. 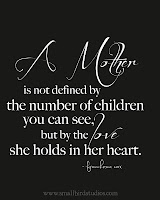 Thinking about all of the Mother's who hold their babies in there hearts.
Last year after Mother's Day I had found an article about the real meaning of Mother's Day. It definitely has changed over the years. I think I prefer the original meaning.
Posted by Becky at 9:44 PM