It took Dereck and I almost a year to finish Liam's gravestone marker. It had been an incredibly hard thing for me to work on because every time I thought about it I just wanted to cry. Cry that my son isn't here and cry that no parent should have to work on something like this. I wanted it to be perfect for him. In my mind I had this vision that people would walk by it and not just think how sad it was that a baby boy was buried there, but that by looking at his marker you would be able to see just how loved he is.

In the beginning we had really wanted his picture on it but it just never worked out with the type of granite we were using. To the right is the picture of him that we would've had on his marker if we were going to use solid black granite. We used dark blue pearl, which is incredibly beautiful, and also is the same granite that the others markers in the family plot are on.


Below is Liam's marker, finally complete and finally in place. 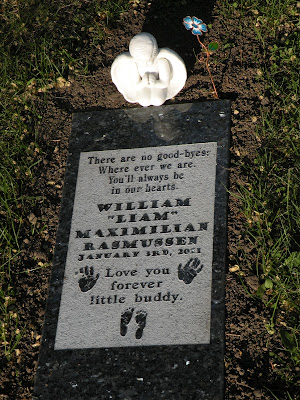 My heart is already so broken from the loss of my Liam and now my sweet Evelynn, but when I read now that another fellow blm lost her precious Ainsley at 17 months old on Saturday morning my heart broke even more. Jen was originally pregnant with twins and lost one of the twins(also named Evelynn) just before they were born. Ainsley had been in the NICU and then the PICU her entire 17 months of life until she passed away. If anyone has a chance they should check out her blog and show this momma and her family some love.
Posted by Becky at 7:38 AM