It is the night before my sweet Evelynn's burial and my emotions have been all over the place today.

I have been so dang angry today. As much as I wish that this was just a bad dream I think it took until today for it to finally set in that tomorrow my second baby, my beautiful baby girl, will soon be buried next to her brother. It will be official then, and I hate it. I hate that this is my life. I just hate it.

I had wanted to spend so much time at the cemetery by Liam, but so far I have spent very little time there at all from what I hoped. I am having a hard time even wanting to be there because it just pisses me off so badly that my daughter is soon going to be there too. This was just not in the plan. It's not that I had finally accepted what had happened to Liam but rather the thought of having Evelynn here and alive had given me this sense of life back that I had lost after Liam passed.

Tonight we went to the cemetery on our way home and saw that her grave had been dug up and was ready for tomorrow. We have the flowers picked out and even planted some in the ground. Pictures have been printed out and some handouts have been made. I think we are prepared for tomorrow, but how can this fricken be? It just like last year all over again.

Life keeps going on for so many others and I just feel stuck again. I thought my life was finally moving forward.

A friend messaged me today. This friend was pregnant at the same time as me, we actually had pretty much the same due date. Remember my original due date, May 18th. Ya that's this Friday also :( She let me know today that she should be having her baby any day now and will be posting tons of pictures on Facebook. I don't know when I will ever be able to ever look at her again, or see her baby, for if and any time I see him I'll think about Evelynn and know that if she were here she would be just a few weeks older than him. I would remember the talks we had while pregnant about getting together with our babies once they were born and how convenient it is that we live so close to one another.

Just like all my other friends in real life and in the blog world, I am happy for you all, but it is going to be hard for me for a long time. I won't lie, I am even incredibly jealous of you all. I just want to know when its going to be my time to have a baby that I can finally take home? I don't think I will ever even be able to handle hearing another person tell me they are pregnant again, at least not until I have a baby in my arms first. (This of course discludes all blm's). I know its not fair to friends, family, and whoever else. People get pregnant, and people have to live there lives, my heart just can't handle it.

It's only been three weeks today since Evelynn passed away and already I am getting so many of those "things you shouldn't say to a babyloss mom" type comments. Tonight I got two of them. One being the good old "I don't know why it happened, but there is a reason why it did and we just won't know for a long time." Listen people who read this; If there is any reason at all why my baby died it was because my uterus ruptured and suffocated my baby. It had nothing to with God needing another angel or God having something else planned for me down the road and Liam and Evelynn had to die for this other wonderful thing to happen. That's all bullshit and I wish you would keep your mouths shut. It's only making things worse. The second being from a family member that said "and I was so hoping to finally get to be a great-grandmother." Hearing that once again confirmed that people just don't understand or even want to understand, and Evelynn was alive for 2 days. TWO DAYS! So what you were one for the two days she lived, but then she died, so now you are no longer one like someone stripped you of that title? And what about Liam? I just don't get people. I'd almost prefer to not even talk to anyone. It sometimes just seems easier to be alone.


A friend made this for us today, and I love it! 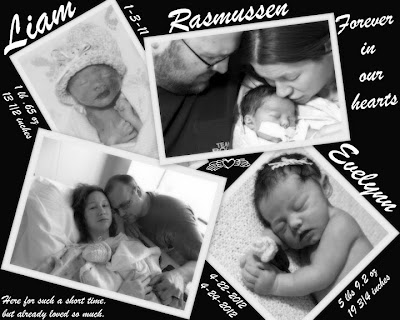