Evelynn's Name, the Color Pink, a Rainbow, and Some Target Gift Cards

Evelynn's Name
Like with Liam's name, Dereck and I wanted our baby girl to have a name that was not only a family name but also a name that had meaning. From the beginning of our pregnancy with Evelynn we had talked about possibly calling her Lynn. Lynn is my dad's name and I have always liked the name Lynn for a girl as well. Dereck had also liked the name Lynn but had wanted a name that was a little longer and then for short we could call her Lynn. We went through many names and there meanings until we came across Evelynn. When we saw Evelynn it seemed all too perfect, for Evelynn meant both LIGHT and LIFE. How fitting would that be? From that point on all I could think about was how Evelynn's name when thinking about it as meaning light was how she was slowly bringing light back into our lives after so much darkness. When thinking about it meaning life, all I could think about is how she was going to be the one who lived, and also whose life brought me back to life. I have thought about the meanings of her name so much since she has passed away and the hope I held within it. I learned after her passing that my dad's moms middle name was also Evelynn. Her middle name Augusta is a name on Derecks dads side of the family. Augusta means magnificent, so when put with Evelynn, her name meant Magnificent Life or Light.
When we saw Evelynn for the first time after she was born we knew right away that she wasn't a Lynn at all, she was clearly an Evelynn. She was our Magnificent Life(or Light).
When I think about her name I get sad that I didn't announce her name sooner. We told some people but not all just in case when she was born we might have wanted to change her name. I wish would've told everyone in blog land and instead of referring her to baby girl used her name. My chances of writing her name as often as I like are little now, also are the chances of me hearing her name as often as I'd like as well.
I love my kids names.


I can't stop thinking about the color pink.
I guess I never understood why people got so wrapped up in the idea that blue has to be for boys and pink has to be for girls. With Liam I knew right away that I didn't want his nursery to be blue. I wanted all his stuff to be greens and other neutral colors. When I was pregnant with Evelynn I told everyone that I didn't want pink stuff. I have never been a huge fan of pink and just because I was having a girl did not mean I had to automatically dress her in pink from head to toe. Once she was born though it all changed. When the doctors gave her to me to hold they had her wrapped in a baby pink blanket, and she looked absolutely beautiful in it. It was like pink was her color. It complemented her dark hair perfectly. All I could think about is what I kind of a mother am I that I was going to deprive my baby girl of pink. It's crazy how much I think about it. For her funeral and her burial I went all out in pink; pink flowers and pink pots. My house is going to be filled with pink now, pink for my daughter.


Evelynn and Liam's cousins Brady and Noah
Dereck's sister-n-law sent me this Facebook message and also this text shortly after Evelynn passed away. Kids really do say the darnedest things and it really makes you wonder how they come up with this stuff, but both brought tears to my eyes. 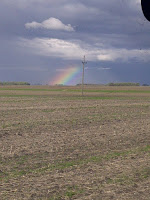 -"I saw that you called Evelynn your rainbow baby. Is there significance in that? I was working with Brady on his therapy and one thing he had to do was draw big pictures using one hand to cross his body. We were outside using sidewalk chalk for this and he asked if he could make a big rainbow for Baby Evelynn. (This was on Tuesday). I don't know why he chose that, but we made big rainbows for her and Liam. "
and
-"I just wanted you to see this. I saw a double rainbow earlier today, but didn't have my phone on me. Brady and Presley said that Evelynn must be watching over everyone."


At Liam's baby shower I got a $150 worth of Target gift cards. I had never got the chance to use them since he died a week later. These gift cards have been sitting in my purse for the past year and a half now. There is lots of things I could buy at Target, but these were for my baby and I refused to use them on anything other than baby stuff. Through my pregnancy with Evelynn I had many chances I could have used them, but didn't. I had decided that they would be perfect to use on diapers and other baby supplies we would need after she was born. I hate to lose them, but I hate to spend them. They were meant to be used for my baby and it doesn't seem right to use them on anything else.
Posted by Becky at 10:58 AM