Well, I suppose I better post something. I haven't wrote anything in over a week now. It's not that I don't have anything to say, because I have so much I want to write about since the burial, I just have been so physically and mentally exhausted this week. This is probably going to sound like a lot of complaining but my back hurts, legs hurt, had a headache for a few days in a row, and I just have no energy. It has been sunny all week in Alaska and I have barely been able to get out and enjoy it. I hate to say it but I am starting to feel like I am just getting depressed. I thought I was doing pretty good with my grief, even really thinking things were getting better, since I was having a lot more good moments than bad. The other day I even started crying in front of my acupuncturist, I think I must have been really tired though because I fell asleep before she had all the needles in me.

Here are a few things that have been on my mind or have happened while we were still home for Liam's burial:

-We had spent a lot of time at the cemetery after Liam had been buried laying by his grave and also walking around. I know I have mentioned in previous posts that this cemetery had a Baby Land and now I am curious to know if all cemeteries have a baby section or not? I got so sad seeing so many other gravestones for babies. We even saw a few where there were multiple babies buried near one another all with the same last name and very close in years apart. I feel sorry for these mothers to have to bury so many babies. I wish I knew her story, their stories, what happened to them and why they couldn't stay. Were they from a miscarriage, stillbirth, SIDS, or maybe some illness shortly after birth. I cried a lot in babyland. It made me just wonder if we'd ever be back burying another child. I know I shouldn't think that way, but I never intended to ever bury a child in the first place and there I was.

-I still get sad thinking about Liam being buried so far away from me. I know he is in a good spot being buried on top of Dereck's dad and in a plot with family, but sometimes I wish he was cremated or buried near us in Alaska. I hate that I can't visit him everyday, once a year just won't be enough. After Liam was buried we also realized that there are now 5 generations of males in Derecks family buried together. That's just too many- Liam, Liam's uncle(Dereck's brother), Liam's grandpa(Dereck's dad), Liam's great grandpa, and great great grandpa. That's just not right:(

-Dereck and I went to visit some of his family and their little boy was so excited to see me. First thing he said when he saw me was, "Hey she's the one who plays with me!" I loved hearing him say that, but last time I saw him I was pregnant and happy, and unfortunately I wasn't this time. We also saw the rest of there house which involved walking through their nursery where there baby was sleeping. The rest of the night all I could think about is how I'll never be able to leave my baby sleeping in the nursery and me being in another room. I can't and I won't, I feel I am going to be one of those crazy moms that will never want to leave their babies side for fear they won't be alive when I return. I hate feeling this way and I know it is important for me to try and be optimistic about the future but how can I now.

-I have been realizing a lot lately on why I should have made my blog more anonymous. I thought telling family and friends about it would help them to understand a little more about how I am dealing with the loss of my son. I am very unhappy with certain members of my family and have never wrote anything about them because I thought they would read this and then be really mad at me. I don't even know how much they have even read but its obvious they have no clue how I am feeling, just don't care, or really just don't know what to say. All I have to say to any of those reasons is that he was a real boy, I held him, he was my son,and I would change places with him in a second if I could, and if you really cared you would even just ask me if I wanted to talk about it, just listen. 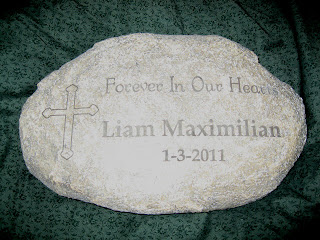 -Also here is the rock I had engraved for Liam's burial. Liam didn't have a gravestone and I wanted him to have something and was so mad that it didn't make it to the burial. I am not going to get into it about why the rock didn't make it but just putting it out there that I am a little bitter about it still.

On a more exciting note:
-On my countdown to stopping the pill I have 13 more days to go. Although May has been a crazy month I am happy it is flying by. I can't wait until June 10th. I am probably getting way too excited but all I can think about is wanting to be pregnant again.
Posted by Becky at 11:16 AM