Seems like forever since I last looked at my blog, or even read anyone's else's blog posts. Life has been busy. Ruby turned 1 in August and Max 3 in September. I can't believe how much they both have grown this past year. Max seems to have changed from toddler to little boy in the past 6 months. He also speaks so well now. He loves playing with his friends. He loves cars, balls, Paw Patrol and really into doing puzzles. He has also been in swimming lessons and starting skating lessons tomorrow. He really wants to play hockey. He also now has glasses. Ruby seems to have moved from baby to toddler overnight. She wants to be just like Max and do everything he's doing. She is running everywhere and climbing on everything. She seems very bright. She is also speaking quite well for her age, saying about 15 words already. It's just so awesome to see them grow through this stages and become such amazing little people.

Big changes also happened at the beginning of the New Year as I decided to go back to work full time. It's definitely been bittersweet. Because of all of my fears of losing them, I never thought I'd be able to leave them at a daycare, but so far so good, and I think it's been good for them too.
Not much else has been going on for us, but for now, I kind of like the mellowness of it all.
Liam's 6th birthday in heaven was on January 3rd. It's hard to believe it's been 6 years. It doesn't affect me like it once did but I'll always wonder who my 6 year old boy would be today. Max is really into birthdays now. So it was nice to have him more involved in picking out a cake and singing happy birthday to his big brother. I try and show him pictures of his older siblings and say they are in heaven, but he doesn't seem to fully understand, yet, but that's okay. Evelynn will be 5 in April, which I also find hard to believe. Every so often I still get tangled up in this web of thoughts varying from "why I didn't go straight to the hospital when I first felt pain" and "why didn't I fight harder for her," but it is what it is, I guess. I still have no desire to go to a baby shower, be around pregnancy talk, or even see newborn, but I do better around it now than in the past. Maybe one day it'll be different.

If you're reading this, thank you for still following along, even though I don't come back here often. If you're new to baby loss. I am sorry, and I hope you find comfort in the words of baby loss mom, or dad, bloggers, like I did, letting you know you're not alone. The same goes for all others who have experienced a uterine rupture, struggled with infertility, used a gestational carrier, or have adopted like my family in order to grow your family. 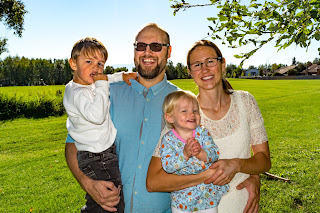