Dereck and I spent our weekend staying at B&B with 7 of our friends. This was the first weekend we have really done anything since being back in Alaska. On Saturday we went skiing on the Denali Park Road in Denali National Park. It was a great day, sunny, and clear skies. I had finished skiing before my friends since I am way out of shape now, and started thinking of Liam. I had told Dereck that I thought it would be cool to get everyone to spell Liam's name out with our skies in the snow, but afraid they would give me that, okay weird why would you do that look. When they finished skiing I asked them about doing that and they immediately got there skis out, not sure if they completely understand but glad they were so willing to help.
By the time nightfall came everyone was pretty hungry and wanted to head to this new Brewery near Healy. I wasn't too hungry and at this point my emotions were definitely starting to take over. I wasn't feeling to much like wanting to be sociable anymore, but did my best to have fun. We laughed, played pool and darts, and listened to this guy play guitar and sing for open mic night. One of his songs really hit home with me and I teared up instantly, just wish I knew the name of the song.
By Sunday I was ready to go home, it surprised me much I felt lost without being able to look at my blog or read any of the BLM posts for a few days. We hung out with our friends for a bit in Willow where we stopped by on our way home to watch the Iditarod restart and they could ice fish. I just wanted to be at home, its amazing how much work it is to put on a happy face for a few days and to hold back all of my emotions from barreling out in front of everyone. I mean I had a fun weekend but it seems like I can only handle so much before my mind takes over and I am just mentally incapable of all other thoughts but one's about Liam. Once home I broke down in the shower, and when I went to bed a few hours later had another long cry, mainly just repeating WHY WHY WHY over and over again. I just can't accept that I have no answer and probably never will. I said a long prayer and then spent a little longer talking to Liam before sleep took over.
Today at work has just been crappy. I have been way to emotional today still, and by 10am I already had to have a short cry in the bathroom. I suppose the lack of sleep I have had in the past week isn't helping. 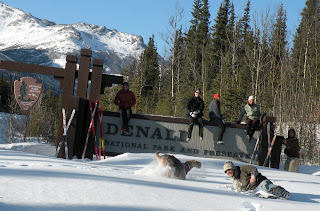 Well here I am many hours later after typing the first portion out and my day has not gotten better. I am so sick of this nightmare that has become my life. Yeah more mail, oh look three more bills. I understand with any surgery or medical care there are bills that follow, I just wish I didn't have to think about them or anything else right now. I guess if Liam were here I wouldn't have cared if I would have had to pay 5 times the amount we have to pay because I would have him here. Its bad enough to already be emotionally and mentally drained and then add financially drained to that list is super depressing. At least physically I am doing better because if I couldn't even get outside for a walk I would really be miserable.
I'm not sure if I had mentioned in any of my posts that I have been looking at going back to school to become a registered nurse. I work in the medical field now taking x-rays but just really think I would be a good nurse. I had already signed up for school and registered for a few classes. I have 6 generals that I would need to take before applying to nursing school, so I wanted to do 2 classes a semester. After some hard thinking in a hot bath tonight I am feeling like maybe I need to either hold off for awhile, or at least take my summer off, and try to make a good attempt at getting my old life back. Plus, I really want to try and get pregnant again, as soon as we can, and if I am stressed out already from everything that's gone on, working and school aren't going to make it any better. I definitely don't want to stress myself out to the point I can't get pregnant or put a lot of added stress on a new pregnancy, but if I don't take these classes then that puts me another year behind on applying for the nursing program and they already have a two year waiting list. I'm starting to think maybe I just need to get another job instead. I guess I just have so many mixed emotions going on right now I don't even know what to do. I wish there was actually a time table that said, at 2 months after your loss you will feel this way and by 6 months you will be back to your old self again. I hate not knowing, there has been enough of that lately.

On a good note I did finally get Liam's story posted, at least up to the point of Dereck and I leaving San Francisco to head back to Minnesota to plan his funeral. I can't believe it took me so long to write, a lot of past emotions being brought up didn't help the process either. I'm sure I'll be adding more to it down the road, I don't want to forget a minute of the time I had with him.
Posted by Becky at 9:09 PM